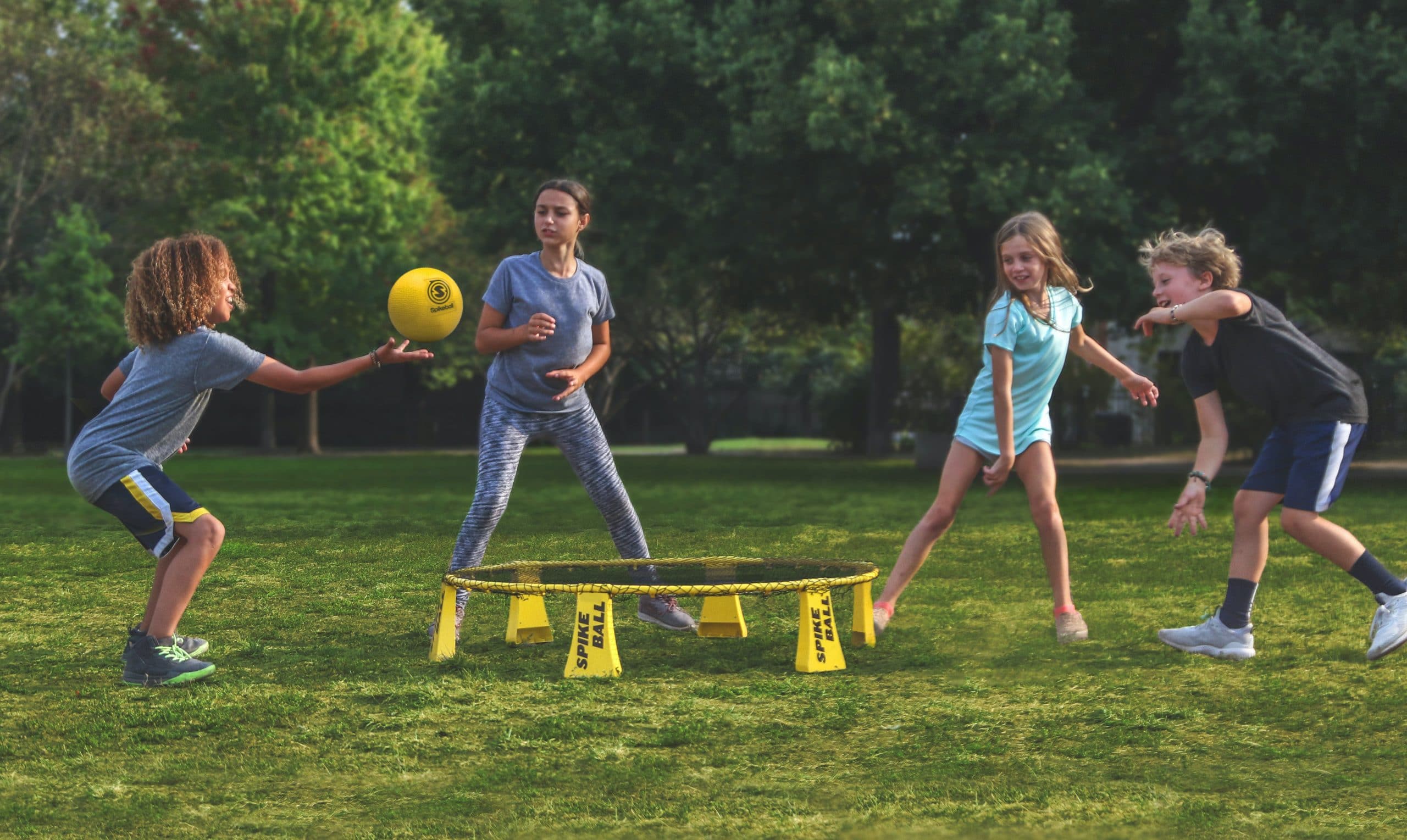 At this point, you’ve probably seen Spikeball or Slammo being played at the park, beach, or outdoors in general. Both kids and adults are in love with playing Slammo or Spikeball. Do you miss playing basketball as a kid, or at least watching kids have a game of croquet outside? Are you curious about the Slammo vs. Spikeball debate? In fact, are there even any differences between the two? Don’t fret, because, in this article, we set the record straight as we compare Slammo vs. Spikeball!

The Slammo vs. Spikeball debate: So which is which?

If you don’t have that much time, we’ve listed some comparisons between the components of Spikeball and Slammo. You’d be able to tell the difference between Slammo and Spikeball in no time!

Spikeball’s legs are adjustable while Slammo’s aren’t. This is a big factor for many buyers.

If you have trouble having perfectly flat spots to play at, Spikeball is the better choice since its legs can be evened out. Even with rugged terrain, you can place your Spikeball and enjoy hours of gameplay without the net wobbling.

Meanwhile, the legs on a Slammo frame stand strictly upright. This makes it hard to position the net on bumpy surfaces, and you’ll need an even surface for better gameplay. That being said, Slammo isn’t that flexible nor adjustable with its frame.

Slammo’s sets have a training ball while Spikeball doesn’t have one.

Slammo comes with a training ball that’s a little bigger than a tournament-size ball. Simpler and safer, it’s optimal for beginners and kids who are still learning to get used to the game. This beginner-friendly feature has been very advantageous for Slammo.

The Spikeball balls are of higher quality than those of Slammo’s.

A ball’s quality is easy to tell even just by touch and feel. Balls from a Spikeball set appear thicker and heavier than Slammo balls. The overall ball structure is also more durable.

Despite that, Slammo has also been making some changes in their ball manufacturing throughout the years. Although lighter and thinner in its build, Slammo balls also have some interesting traits that some players prefer. Slammo balls have a ‘livelier’ or higher bounce that makes for good gameplay. They’re great for beginners who would like more bounce in their balls, as opposed to Spikeball users who might like a more ‘controlled’ bounce.

Slammo is significantly cheaper than Spikeball. You can buy a Spikeball set at $55-$99, while a Slammo’s is priced at least $35. If you are just buying for leisure and are mainly concerned about cost, a Slammo would be a good choice.

Although not overly drastic, there is a difference between the build and total quality of Spikeball and Slammo sets. For its price, Spikeball has a sturdier and more high-quality build. Although Slammo is also a trusted brand, the material is slightly flimsier than the quality of plastic used in a Spikeball set. However, that’s understandable considering how affordable Slammo is.

A Brief History of Slammo vs. Spikeball

Spikeball is a net sport heavily influenced by the gameplay of volleyball. Originally, industrial designer and toymaker Jeff Knurek invented Spikeball in 1989. It was then marketed by the Japanese entertainment company Tomy. While there was a little rise in popularity between 1989-1995, it swiftly faded due to outdated equipment. Years later, Spikeball Inc.’s CEO Chris Ruder helped revive the sport.

‘Spikeball’ became the common name for the sport since Spikeball Inc. was firstly responsible for the game’s revival in 2008. Much like the way people call a photocopy machine a ‘Xerox’ machine, many call and know the game as ‘Spikeball’.

Since Spikeball Inc. could not get a patent on the product, several other companies started coming up with similar equipment. Unknown to many, the current name of the game is actually Roundnet. Both Spikeball and Slammo are brands who manufacture equipment for the game Roundnet. Meanwhile, GoSports-manufactured Slammo is one of the leading products to follow in Spikeball Inc.’s footsteps. Other brands that also sell Roundnet sets are Bounceball and Revol.

How to Play Roundnet (AKA Spikeball)

Two teams play the game. The number of players can vary. Players are positioned at 4 points around the trampoline-like net; with partners located at adjacent positions. To start the game, players serve the ball by spiking it onto the net so it ricochets towards their opponents.

Scoring in Roundnet (AKA Spikeball)

Scoring in roundnet is dictated by “rally scoring”, meaning that a team may earn a point whether it’s their turn to serve or not. Again, the game usually ends upon teams reaching 11, 15 or 21 points, but it is also up to the organizer’s discretion. Similar to volleyball and foursquare, teams can only win by two points. Points are earned through the following:

One of the reasons behind roundnet’s popularity is that you can add variations of your choice to the gameplay. While these entertaining variations are not usually done for tournaments, they can spice things up a little! Adding extra flavors to the game allows for players to challenge each other some more, and in doing so either ease up or intensify the competitive aspect of roundnet. Here are some samples of known variations:

Just the Half of it

The original playing field is split in half, thereby decreasing the size of the play area and making the distance between players smaller.

Players must play the game on their knees. Usually, only one or a few rounds in a game are played like this as it is pretty difficult.

Both teams can only earn a point from the opposing team making offensive mistakes. Shots purposefully done wrong will result in a do-over.

Players must use their shirts to bounce the ball during the second hit of a continuous rally.

Players must hold hands with their respective teammates for the duration of the round. They can only break away from each other in between rounds and after the entire game.

Players must put their arms in their shirt sleeves up to their wrist (wrists at armpits), imitating the perceived shortness of a T-Rex’s arms. Then, they play with regular rules.

Players must be standing or jumping on only one leg during the duration of the round, thus imitating a one-legged pirate.

Players must use their non-dominant hand to play.

Players should use the back of their hands to hit the ball.

If both players in a team can take turns in doing a push-up mid-rally and still win the point, the team gets an additional 2 points for having great stamina.

Aside from these variations, players are free to come up with their own variations—the sky’s the limit!

Slammo vs. Spikeball: Which should I choose?

How do we really settle the Slammo vs. Spikeball debate? Besides the obvious differences between Spikeball and Slammo, it’s important to look at the similarities between the two brands. Only through consideration of these factors will you make the best possible choice.

Hassle-free shopping? Both Slammo and Spikeball can be bought online, and both are available on Amazon.com! You don’t even have to go out to finally have your roundnet equipment!

Looking for a product that lasts? Both Slammo and Spikeball have a lifetime warranty. This is good news for recreational products like these because of the wear-and-tear it’ll get from years of usage. Whatever you buy, your money’s worth is guaranteed!

Always on the go? Both Slammo and Spikeball come with carrying bags so you can easily bring your roundnet set with you to the beach, on camping trips, or just the outdoors in general. Both sets feature convenient portability, something important for recreational outdoor games.

Worried about bad customer service? Both Slammo and Spikeball boast exemplary customer service – a big advantage for any product. Aside from a quick response time to calls and queries, both brands make fast, no-hassle replacements in case of ruined products.

When it comes to the nitty-gritty details, here are the factors to help you choose between Slammo vs. Spikeball:

You should choose a Slammo set if:

You should choose a Spikeball set if:

While there are multiple differences between these two roundnet sets, these don’t necessarily make one brand superior over the other. So check out all the info that we’ve selected and listed down for you, and make a balanced decision between what you want and what you need! Aside from Slammo and Spikeball, there are also other ways for you and your family to have fun outdoors or at the safety of your own home, so don’t forget to check out our links and other titles for more information!